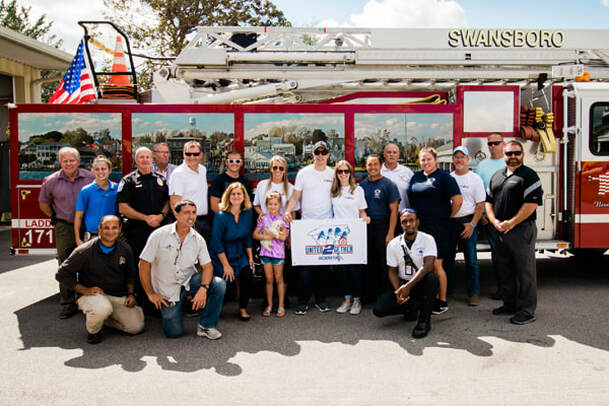 He was in Swansboro as part of an effort to make contact with police and fire departments, and other first responders who worked throughout Hurricane Florence.

“Our effort here is to help out in any way we can,” he said while posing for photos and signing autographs for a grateful public. “It’s all about supporting the first responders and the military, to thank them for their work.”

Keselowski, who drives with the Ford Xfinity Series racing manufacturer team, was in Swansboro with his wife, Paige, a former resident of Plymouth.

“It was certainly a pleasure to meet with Brad and his organization,” Swansboro Fire Department Chief Mark Tessing said. “It’s nice to know that there are groups out there that look after people who look after other people. The fact that he personally took an interest in what we do and how we do it meant a lot to our first responders.

“So often we look at the sports figures and put them on pedestals as role models. But here’s a man that proved he’s more than just another sports figure. It was certainly my pleasure to meet with him and his organization.”

“This is a foundation my wife and I put together,” he said while at the Swansboro Public Safety Facility.

“Due to days of record-breaking rainfall delivered by Florence, flooding is the primary concern in affected areas,” the Checkered Flag Foundation announced on its website. “Teams of first responders are working overtime providing water rescues and helping ensure the safety of residents in the impacted areas. Immediate needs of first responders include clothes, fuel and food, but will continue to change and increase as rescue and cleanup efforts continue.”

Under the foundation, the couple launched United2Gether.

“My wife is from this area,” Keselowski said. “We wanted to do something special.”

Founded in 2010, the mission of Keselowski’s Checkered Flag Foundation is to honor and assist those who have sacrificed greatly for our country, according to the website.

In 2017, the Checkered Flag Foundation raised upwards of $450,000 and assisted or honored more than 250 individuals and organization in order to help veterans and first responders during their road to recovery.

The Keselowskis recognized the need would be great in the wake of Hurricane Florence.

“Growing up in Eastern North Carolina and seeing the devastation Hurricane Florence has brought has been heartbreaking,” said Paige Keselowski.

“Although my hometown was not heavily impacted by the storm, many of our friends and family in other communities were. BKCFF, Brad and myself are hoping to unite together to provide support to our first responders so that they may provide assistance to the communities affected by the storm.”

Brad Keselowski said he was happy to be in Swansboro and to meet with the police, firefighters and others who worked so hard during the storm, and to support them in some way.

“We want to give them anything that they might need. Food,” he said, indicating the food truck nearby, “T-shirts, sunglasses, gloves, socks …”

“Rebuilding after the storm will be a slow process and our group is committed to doing what we can to help those helping others,” Paige Keselowski said. “We are grateful for any and all donations and support of our beautiful coast during this time.”
​
To view this article as it appears on Carolina Coast Online, click here.
Give Back