HELPING VETERANS AND FIRST RESPONDERS ON THEIR ROAD TO RECOVERY

One thing many NASCAR fans, lifelong and new to the sport, love about the drivers in the top tier series of racing is their commitment to helping others through their personal foundations. Through these foundations, drivers are able to meet and make memories for terminally ill children and their families, provide numerous resources to animal shelters, and donate financially and physically to many other noble causes.

Brad Keselowski is no exception with his Checkered Flag Foundation, which was formed in 2010 with a mission to “honor and assist those who have sacrificed greatly for our country.”

CHECKERED FLAG FOUNDATION: HELPING VETERANS AND FIRST RESPONDERS ON THEIR ROAD TO RECOVERY
In 2017 the Checkered Flag Foundation raised approximately $450,000 and was able to honor or provide assistance to over “250 individuals and organizations in order to help veterans and first responders during their road to recovery.”

One of the most prominent ways assistance has been provided is through the Fisher House Foundation which serves families who have lost a loved one while serving our country through any branch of the military. In 2017, the Foundation donated $150,000 toward the construction of a Fisher House in Keselowski’s home state of Michigan.

Another way the Foundation served military members in 2017 was through the LTi Printing 200 Camping World Truck Series race at Michigan International Speedway. At this race, two active-duty military members were hosted by the Foundation and were able to serve as Grand Marshall and Honorary Starter for the race. They also had the opportunity to participate in a meet and greet session with Keselowski and a behind-the-scenes experience for the Monster Energy NASCAR Cup Series race.

NASCAR Salutes is a program initiated by NASCAR to honor fallen and former military members at three different races from Memorial Day through July 4th. Through this series of races in 2017, Keselowski carried the name of a fallen soldier on the windshield of his race car, as well as presented the family with a replica of the windshield. He also hosted two veterans and their caregivers at a CWTS race and partnered with Daytona International Speedway to offer 200 tickets to active-duty military members, veterans, and caregivers, as well as host meet and greet sessions at these events.

National Military Family Association and their Operation Purple Healing Adventure focuses on injured military personnel who are preparing to return, or have recently returned, home, helping these family members reconnect, and providing training on how families can best care for their loved ones. The Checkered Flag Foundation partnered with Operation Purple Healing and Charlotte Motor Speedway to provide a camping experience for injured military members and their families, as well as a meet and greet session at the track with Keselowski and his wife, Paige.

According to Suzanne Boyd, Executive Director of the Checkered Flag Foundation, Keselowski has a goal to raise $1 million in 2018 to continue even more of the amazing work he has been doing over the past 7 years.

In response to the incredible ways the Checkered Flag Foundation has been able to serve military members and their families, Keselowski was a 2017 finalist for the Comcast Community Champion of the Year award. He revealed that he had ‘considered joining the armed forces’ if racing didn’t work out for him. He also shared that he feels part of his responsibility is to give back, to show he cares, and to instill hope in others. You can watch his entire interview for NASCAR America here.
​
SUPPORT FOR THE CHECKERED FLAG FOUNDATION
In addition to direct donations, Keselowski partners with a number of businesses that assist in raising funds and awareness for his foundation.

In the Spring of 2018, Keselowski will launch a personally designed line of eyewear through Epoch Eyewear, with a portion of the proceeds benefiting the mission of the Checkered Flag Foundation.

Keselowski also partners with Pure Michigan Talent Connect to help find employment for veterans in the state of Michigan.

Boyd went on to inform me that in addition to the donations and assistance from the aforementioned organizations, the Checkered Flag Foundation holds different fundraisers throughout the year - targeting both corporate sponsors and the general public. She said, “Our two main fundraisers in 2017 were The Huntsman Shootout, which was an invitation-only, private event to benefit the Fisher House Foundation, and the Tribute 2 Veterans program, where fans donated to the Foundation in exchange for placing the name of a veteran on Keselowski’s car for the Phoenix MENCS race.”

In February of 2018, an online store was launched on the Foundation’s website featuring a Checkered Flag Foundation t-shirt and an autographed Race 2 Recovery diecast for fans to purchase. In March, an autographed diecast of Keselowski’s 2017 Martinsville win was added.

Boyd mentioned there are plans to use the store to feature “limited availability” items that fans aren’t able to find anywhere else. When Keselowski was a guest analyst for a February Xfinity race on FS1, he mentioned they had recently “cleaned out the basement” at Brad Keselowski, Inc. and put together mystery bags for fans to purchase. These grab bags were listed at $50 each and sold out in only 15 minutes. A Keselowski fan, Laura M., posted in the Team Penske Nation Facebook group that she was able to purchase a bag and shared the following picture, stating, “I scored!” ​​​ 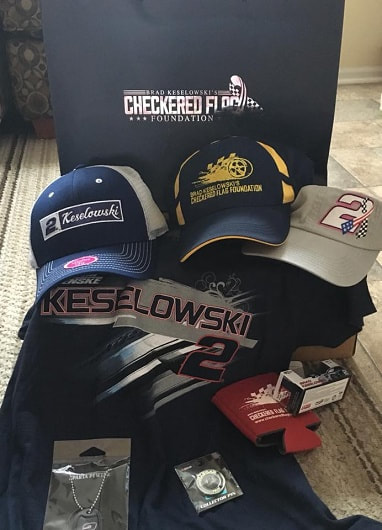 Due to the popularity of the mystery bags, email subscribers will now receive access to a private pre-sale whenever limited availability items are posted.

All proceeds from items sold in the online store, whether a regular item or limited availability, benefit the mission of supporting and honoring those that have served our country.

CHECKERED FLAG FOUNDATION: TOUCHING THE LIVES OF MILITARY AND THEIR FAMILIES
I asked Boyd if Keselowski makes plans to meet military members and their families at every race or if it just spontaneously happens as he is around the track on race weekends. Boyd responded, “It’s a combination. Sometimes we have specific programs that bring military members to the track. An example of this was last year when we sponsored the National Military Family Association and their Operation Purple Healing Adventure. We worked with Charlotte Motor Speedway to offer those families tickets and pre-race access (to the Bank of America 500), where they had a chance to meet and personally thank Brad and Paige. This meant so much to Brad, Paige, and our entire team. He really is impacted by those that he meets and by the sacrifices they have made. Then there are other times when the meetings are unplanned. I find that people seek out Brad because he is such a strong supporter of our military and first responders. And he’s always interested to meet them, hear their stories, and to show his gratitude.”

Fans on Twitter were all too happy to share how they have supported and donated to, as well as received support from, Keselowski and the Checkered Flag Foundation.
​
Sharon K. stated that she made a donation to the Checkered Flag Foundation in honor of her father who served in the Air Force for 29 years, in both the Korean and Vietnam Wars, retiring in 1985 as a Senior Master Sergeant. Through a donation, she was able to have his name on Keselowski’s car at the November 2017 race at the now ISM Raceway. Keselowski decided to take this one step further to also include the names of the honorees on his CWTS truck #29 driven by Chase Briscoe and, after the race, he sent pieces of the sheet metal with the honorees names to the family members that donated. She shared these two pictures - one of her, her brother, and her father, serving our country alongside each other, and one of the sheet metal from Keselowski’s car that she had framed. She said, “I love that
Seth H., a Marine who had been deployed to Iraq twice, told me how Keselowski changed his life “without even trying to.” He shared that he was honorably discharged in 2009 after being wounded by a rocket, sniper, and two mortar rounds, and his life after was, understandably, not the same. A friend had an extra ticket to a race in 2013, and while Seth had not been very interested in the sport, he attended his first race and “fell absolutely in love” with NASCAR. He didn’t know anything about any of the drivers, but thought the “white #2 car looked the best.” He feels Keselowski’s drive, motivation, and loyalty was able to give Seth his “edge” back. He also shared that he’s donated to the Foundation to “try to help Brad help veterans.” He said, “Having this sport and such an amazing driver to look up to has had an absolutely life changing impact on me.”
​
Cory R. posted that he became a Keselowski fan in 2008 when he was able to meet Keselowski and Dale Earnhardt, Jr. onboard the USS Theodore Roosevelt. He said that it was “the coolest experience to meet someone so passionate about our nation’s military, and to see him carry it still today is amazing!”

Daniel B. is a direct recipient of assistance from the Checkered Flag Foundation and their partnership with Operation Purple Healing Adventure. He shared the following image and said, “Brad and the Checkered Flag Foundation allowed my family to stay at a beautiful resort in North Carolina, then provided us tickets to the Bank of America 500 (at Charlotte Motor Speedway). He came out and engaged with everyone that had participated in the retreat and then hung around until everyone had a photo with him. Class act!” 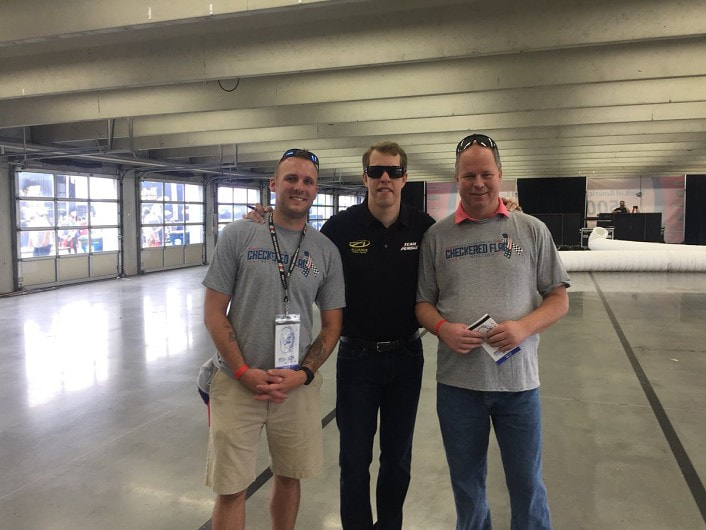 Tammy B. was kind enough to relate the story of how her uncle, Sgt. Maurice Seghetti, a Vietnam war hero, carried a picture of her and her sisters with him throughout the war. She is the middle child in the picture below, with her sisters Holly Seghetti Colvin to her left, and Marti Seghetti Kennedy to her right. She and her sisters donated to the Checkered Flag Foundation to have their uncle’s name listed on Keselowski’s car for the November race in 2017 at Phoenix. ​​ 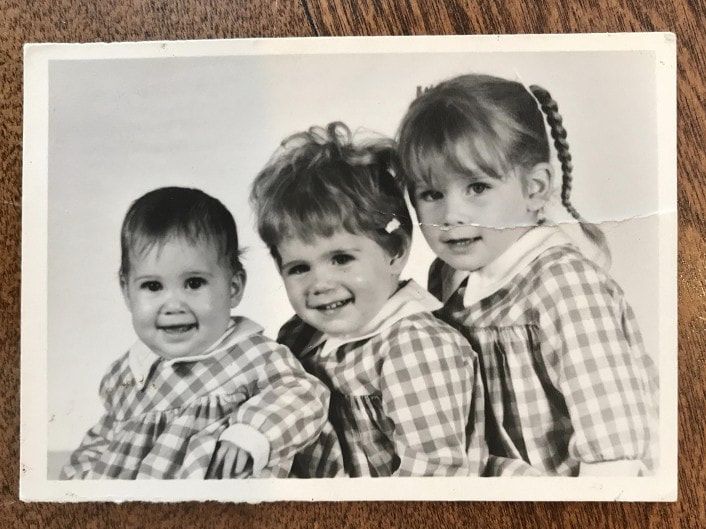 It is truly incredible to hear how many lives have been touched through Keselowski and his Foundation. Those seeking to help Keselowski in his efforts can donate directly to the Checkered Flag Foundation through his website.

You can find more updates on the Checkered Flag Foundation through social media on Facebook, Instagram, and Twitter. You can also keep up with current Foundation news by signing up for their email newsletter.

Article Courtesy of Terra Jones with LadiesOfSpeed.com.
Give Back